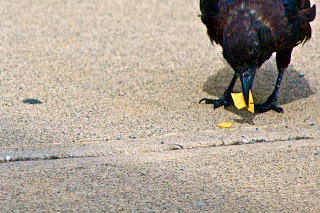 Most of the interactions happen upon my departure. With the presumptuous danger of human removed, the entire murder descends upon the feast. For once actually looking like the bickering, pushy and mean birds some assume them to be, they quickly establish their usual hierarchy.

Once every crumb is gone, I turn back and throw just a few more on the ground. The last remaining slowpoke is richly rewarded.


~ Written in December 2009 for an exhibition in Victoria. True to this day. ~

Email ThisBlogThis!Share to TwitterShare to FacebookShare to Pinterest
Labels: LIFE CANNOT BE RUSHED, RICH REWARDS FOR THE RESILIENT

Yes, it rains here. A lot. The humidity soaks through your clothes and chills you to the bone sometimes. If you hug a thermos of hot lemon, honey and ginger water, you manage to put up with it  quite nicely. You can wish for sunny skies, but you'd miss out on the earthy, greyed out, mossy log kind of scents that envelope you when you walk around a foggy lake. You can remember Miami streets peppered with colour, language and song, but don't forget the soft, subtle and gentle ground below your feet and sweet morning birds of your own home town.

The days when the cadmium giant does shine down upon this incredible land are also breathtaking. Maybe because they are more rare, maybe because the light is more crisp and clear than down south. There are a thousand maybes why it so, but you will not find a place like this elsewhere. Breathe in the sharp morning air until your lungs tingle and your nostrils burn in anticipation of the next inhale. Let the sun make it seem it's pink beyond your closed eyelids. Touch the dew covered grass with your naked, cold fingertips. And finally, listen to the delicious sounds around you with every cell of your miniature hair covered ears. For days like this make the moss on the sidewalk look magical. 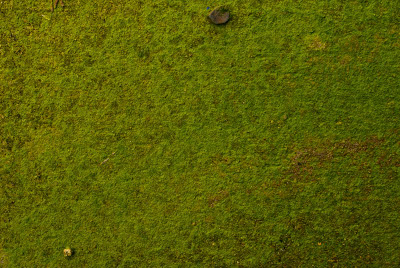 Email ThisBlogThis!Share to TwitterShare to FacebookShare to Pinterest
Labels: LIVING ON THE WEST COAST, USING YOUR SENSES

This was a study in shading, glazing and learning more about properties of transparent pigment. I wanted to see if I could achieve the same contrast as I do with black - without actually applying any.

The simple answer is no. The surprise however, is that I like the result better. The depth of colour in the eye for example, would have been lost under black. Layers of Payne's grey, sienna, Sap green and others would have been greatly diminished. I also wanted the shadow to be more multi-dimensional. The hue and darkness level below the belly vary from ones under the tail. Hmm...an exercise in subtleties.

Goodbye, black? No, no, no. I love you too much. But, you may find yourself suspended in my mixed media works more often than you will in the crow paintings. Ironic, yes, for many still believe that crows are black.

She wore it proudly. Precariously perched on her head, her bright new adornment made her feel like a queen. It did not matter that it was about to fall off. She felt beautiful. Sienna minded little that this magical feeling was ever so temporary. She believed that wonder is a beautiful thing to enjoy, even in tiny amounts. If you know where to look, you'll always see it. 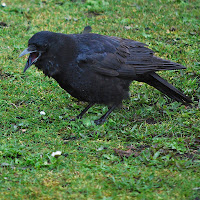 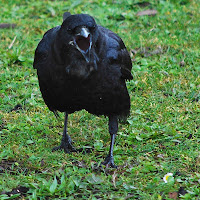 Different crows have different limits. Some let you get close, others don't. Unless I'm travelling, I try to 'befriend' my feathered models before I propose a photo shoot. For the most part, the longer I allow for our acquaintance to establish, the more cooperation I receive. 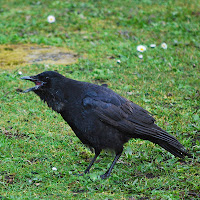 As is the case with humans, there are exceptions. Perhaps born with more exhibitionist genes, certain creatures seem to crave the spotlight. Those are the happy to pose, look over their wing, strut and so on birds.

Then there are crows that just prefer privacy. Mostly they fly away when I get too close. Every now and then though, I get the territorial, cantankerous, grumpy-beyond-belief and just plain old rude birds. I love them. It's hard not to burst out laughing, but I attempt to contain my amusement and not offend any further. I don't want to hurt their pride. After all, they were there before I came along. Just because I'm bigger and human does not give me the right to dethrone a corvid queen or king.

My mud boots sank into the squishy grey matter and made a suction sound each time I took a step. When I finally made it to the fallen branches, I discovered that even if i managed to drag them, I'd never make it home. The willow arms were too heavy with pungent mud and stubborn green leaves.


That's when I got the looks. Oh, right - they're staring at my then cadmium red hair. No, you goof - they're calling the foreman. Not only are you trespassing, you're not wearing a helmet or steel toed boots.

I returned much later. Only one guy was still working. Looking up at him in his digger, I couldn't decide if the machine or the man was more menacing. Turned out his name was Mike. Heavily bearded and crudely tattooed, he would have easily passed for a bouncer at the former Marble Arch or Cecil. Stuttering, I managed to spit out that I just wanted a few branches for an installation in Vancouver. "Would that be okay?" He climbed down, asked me how I wanted them cut up, proceeded to skillfully carve the half alive tree limbs with a chainsaw and then offered me the keys to his construction truck. "Your truck is too small and pretty. You'll scratch it all up." I've kept one beautifully squiggly branch to this day. It's 12 feet tall. I hung Chinese wind chimes on it.

Email ThisBlogThis!Share to TwitterShare to FacebookShare to Pinterest
Labels: NOT JUDGING A BOOK BY ITS COVER, WILLOW, WIND CHIMES

Sensitive Ego Within a Confident Facade

Aware of her charms yet doubting herself, she hopped between the fantasy room of a comic shop and the triple espresso crowd up the street.

Email ThisBlogThis!Share to TwitterShare to FacebookShare to Pinterest
Labels: CONFIDENCE, HOW SHE FEELS INSIDE, PRESENTABLE APPEARANCE

How to tell my mind to talk to the hand.

With five paintings in the works, it's been a busy week. Inspiration, brushes and music flowing, I've felt both grounded and soaringly high.

This is a rare combination for me - I'm either flying in an idea-filled sky or standing with my feet firmly planted and painting with control. To be able to successfully transfer the high frequency chatter in my mind directly to a panel is a beautiful thing indeed. The result is generally a piece with equal parts skill, humour and wonder. This applies whether it's a straight forward crow portrait or a (far tougher to design) abstract.

Perhaps my meditation has finally reached a much desired level of, dare I say, equilibrium? Is this previously elusive carrot actually moving from the front of my cold nose to my warm hand? Has the subconsciously planted focus really blossomed into a rose (or rather a pepper-scented freesia) that I can pick up any time?

Maybe it's the absence of the news radio station I had seemingly been addicted to. It's possible that lovely pieces of "Lego House" or "Wunderkind" have dripped in along with the pigment I apply.

Whatever the reason, it has been blissful in my creative space. Literally and metaphorically. My eight by eight room has provided just enough room for everything, including the ever-essential goof factor (one of the many lessons my son taught me).